It seems Summer is finally here, and with the warming weather we are sure to find ourselves in the midst of more and more adventure as the season rolls on.

Yes indeed, and probably for many, the joys of the Summer heat are sure to incite one or many exciting and unexpected journeys and voyages.

Whether they be jet setting the globe, or simply hopping the hoods of your own town or city, a true adventurer knows that as much as anything that looking good and feeling great on your exciting expedition is as much the fun as averting danger and uncovering sinister ploys against humanity . . . 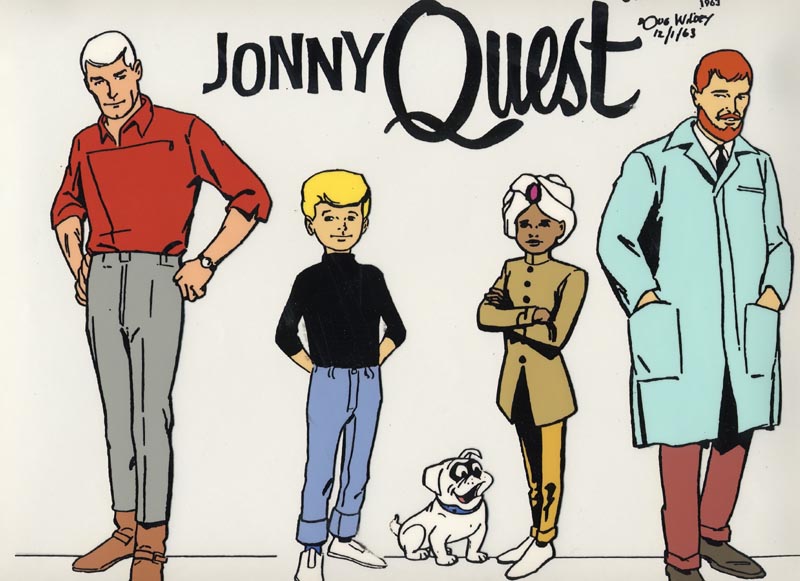 So we couldn’t NOT visit the ultra-cool, hip, and happening, bad-ass, crime-fighting, science seeking, gun toting, mid-century realness of one we have always so admired- Mr. Jonny Quest.

Jonny starred in his own television series, created by Hannah Barbara (the folks that brought you “The Flinstones” and “The Jetsons“), called “Jonny Quest” which premiered in 1964 and would run for two seasons, ending in 1965.

The blonde boy in black and blue is indeed an unmatched original, with his sophisticated turban-wearing side-kick Hadji at his side, and his adorable pal Bandit; the two kick-ass kidsters found themselves against everything from ninjas, mummies, and giant robot spiders, to pterodactyls, and knife wielding scuba divers.

With careful wit, precise execution, charm, and a bit of luck they always seem to manage. . .

Also along for the ride, and taking part in festivities, are the equally style savvy father of Jonny, Dr. Quest, and his hunky white haired “bodyguard”, Race Bannon. Race is a strong and physical war vet who likes to spend his off-time in a bikini on the beach, while Dr. Quest takes his handsome ginger beard and lab coat inside to research new advancements in engineering, chemistry, and physics. 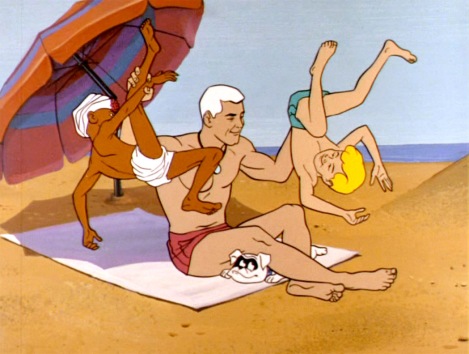 They make a great couple, if you ask me. And they take such great care of the kids (when they’re not putting them plain into the face of danger). . .

But, apart from the bizarre family dynamics described above, there’s no doubting that Jonny Quest has what it takes to be a bold and sophisticated taste-maker of today and tomorrow with his impeccably simple and classic get-up; one that can easily be recreated for yourself!

Though, there are plenty of options out there, the one that stood out for us was this Chunky Wool Knit Turtleneck by T BY ALEXANDER WANG ($265), because of its thicker knit that adds a bit more to the number. It doesn’t have to cling to your body. A comfortable and relaxed fit is best, especially in the summer. {source: OPENING CEREMONY} 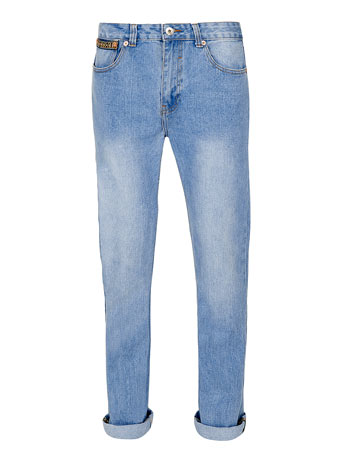 For the pants, we wanted to stay as close to Jonny’s light-blue washed denim look he has in the cartoon. With all the adventures he has been on, we figured this washed out and distressed look works great for achieving that true adventure spirit. We think we found the perfect pair here from Topman – The Bellfield Cabrera 5-Pocket Jean (£40.00).

5 Pockets are perfect for storing skeleton keys, pencils, chewing gum, notepads, compasses, anecdotes, pocket knives – all those things young adventurers would need for a good day of adventuring. Roll up the cuffs to stay truest to our vintage inspiration. 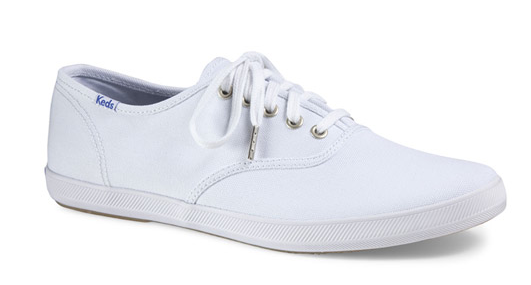 And last but not least, the shoes. Looks like our Jonny Quest look is almost complete! But not before we pick out the perfect pair of white sneakers to round out the look. Since Keds are so classic, and really became popular around Jonny’s time (the early 1960s), I can just picture Jonny kicking up his heels and running straight from whatever was chasing him in a pair of these puppies. They are always super affordable, durable, and timeless.

We went for the classic Keds Men’s Champion Originals in White ($45), because that’s just how our inspiration, Jonny Quest would do it.

And that’s it! It was that easy. Now, the adventuring can begin, and vintage style can yet again win! ! ! 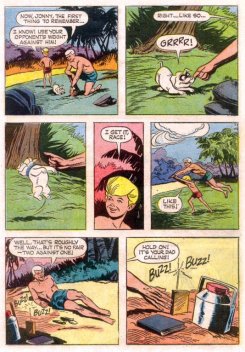 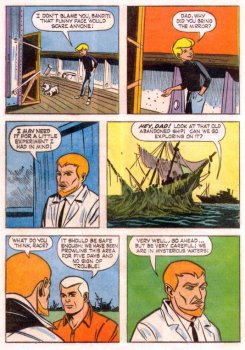 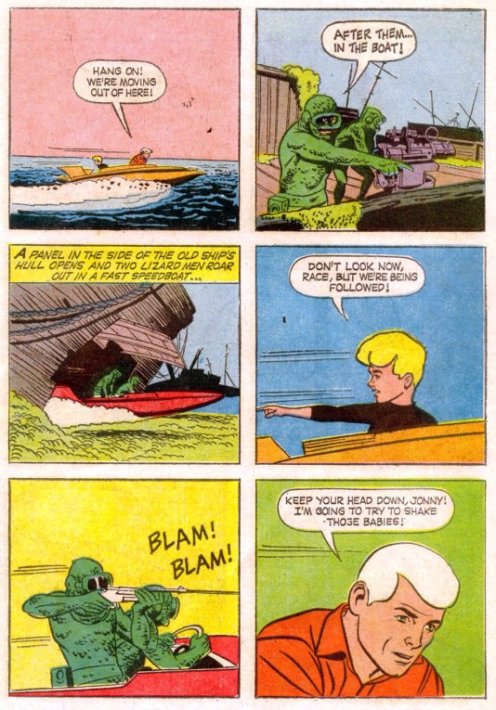 If it aint broke, don’t fix it, they always say. The same thing goes for style. When we look back to the past at a great thing like Jonny Quest, we can’t help but let our style motors run on overdrive at the potential for greatness today with some of their amazing midcentury atomic takes on classic American sportswear and utilitarianism.

Everything about the cartoon was groundbreaking for the time, so in our heart we find ourselves beating to that same rebel beat, and wanting to keep this heritage alive and well. The graphic nature of the cartoon made for a revolutionary look on the screen (jet black was rarely used and never as heavily as before “Jonny Quest“, and the uber jazzy soundtrack was also another selling point towards a radical and refined new take on the adventure genre.

No doubt, a viewer could find new ideas and stories to tantalize and spark the imagination each and every time they watched the show, but very rarely are the characters’ unique and sophisticated sense of style brought to the forefront in this way.

That’s why we thought it important to see out this vintage style inspiration, the Jonny Quest way.

XIXIXI GETS YOU 25 % OFF THIS SUMMER…

GET THE LOOK TODAY