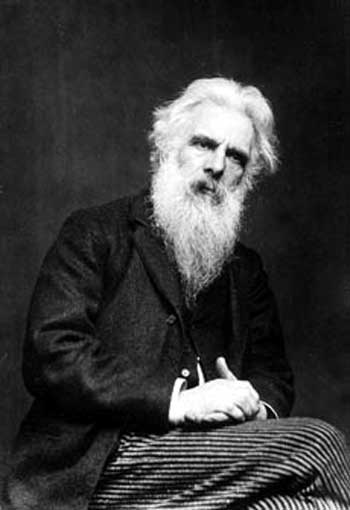 Eadweard J. Muybridge was born Born on the 9th of April 1830 and lived until May 8th 1904.  He was an English photographer who spent much of his professional life in the United Stated.  Born Edward James Muggeridge, he was of Dutch descent. Muggeridge changed his name several times early in his US career. In the 1870s, he changed his first name again to Eadweard, to match the spelling of King Edward shown on the plinth of the Kingston coronation stone.   He is known for his pioneering work on animal locomotion which used multiple cameras to capture motion, and his zoopraxiscope, a device for projecting motion pictures that pre-dated the flexible perforated film strip. 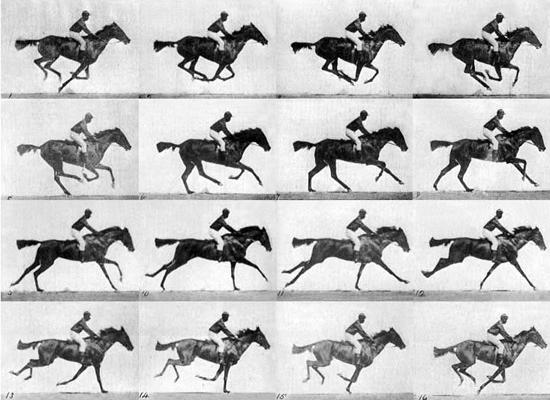 In 1872, former Governor of California Leland Stanford, a businessman and race-horse owner, had taken a position on a popularly-debated question of the day: whether all four of a horse’s hooves are off the ground at the same time during the trot. Up until this time, most paintings of horses at full gallop showed the front legs extended forward and the hind legs extended to the rear.  His Horse in Motion shows that the hooves do all leave the ground simultaneously — although not with the legs fully extended forward and back, as contemporary illustrators tended to imagine, but rather at the moment when the horse’s legs and hooves are tucked beneath as it switches from “pulling” with the front legs to “pushing” with the back legs.

In his studies, Muybridge used a series of large glass-plate cameras placed in a line, each one being triggered by a thread as the horse passed. Later he used a clockwork device to set off the shutters and capture the images. The images were copied in the form of silhouettes onto a disc and viewed in a machine called a zoopraxiscope. This device and process were an intermediate stage toward motion pictures or cinematography. This series of photos stands as one of the earliest forms of videography. 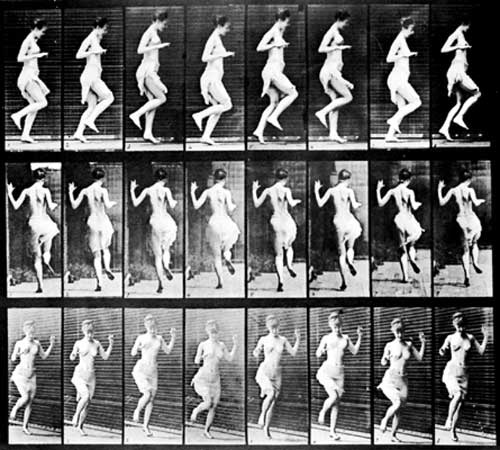 In 1874, living in San Francisco Bay Area, Muybridge discovered that his wife had a lover, a Major Harry Larkyns. On October 17th, he sought out Larkyns and said, “Good evening, Major, my name is Muybridge and here’s the answer to the letter you sent my wife.” He shot and killed the Major pointblank.  Ultimately he was acquitted for “justifiable homicide” thanks to Stanford who footed his legal fee’s.

Muybridge would go on to dedicate his life to his work and many studies involving motion.   And his exhibitions are still touring today.  It might just be the smoking gun, but we respect and love a true genius who marches to his own beat, and never hesitates at something, or someone standing in his way.
The Eye.