“I think today’s music absolutely stinks. I really do mean that.”

Don’t worry, we know. Considering today’s reigning teen idol is Mr. Justin Bieber – you know him- it’s easy to see Mr. Avalon’s remorse. Sure the boy from Stratford has plenty of swag, but to Frankie Avalon I’m sure he’s no Teen Angel! 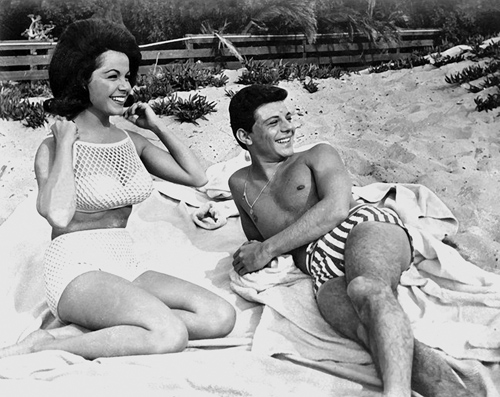 Frankie ascended the throne of Teen Supreme  starring in “Beach Party”with Beachgirl Extraordinarie Annette Funicello, the first of five official “Beach Party” films that would spin “Beach Party” mythology into the public realm, and without a doubt kick fashion’s ass.

Frankie Avalon was far too much a sweetheart to ever kick anyone’s ass, but his die-hard all american 1960s summer fashions definitely do all the talking anyone needs.

It would be this single released Feb. 2, 1959 , “Venus”, that would debut a young gentleman from Philadelphia’s sparkling talents. Couldn’t imagine the Biebs crooning so cool.